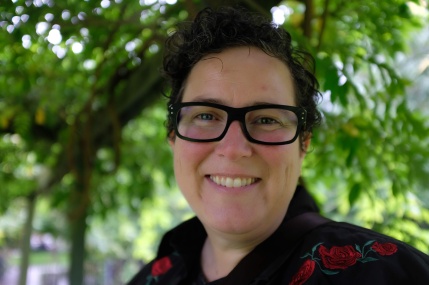 Every year, in the middle of the Oregon Film History Conference, we stop talking about Oregon’s rich film, animation and print cartooning history long enough to pay tribute to the people who do the work which makes film history research possible. This year we honor Heather Petrocelli.

In 2013, Heather preserved a set of films which came out of PSU’s Center for the Moving Image (1969-1981). She secured financial support from the Multnomah County Cultural Coalition and arranged for Gary Lacher to do the film to digital transfers.

Some of the CMI titles Heather preserved:

Living Together (1972) with Margaret Mead

With these films, it is possible to piece together the teaching approach PSU film professor Andries Deinum used in his Center For The Moving Image, the first film school in the PNW.

Heather Petrocelli’s masters thesis, Portland’s “Refugee from Occupied Hollywood”: Andries Deinum, his Center for the Moving Image, and Film Education in the United States, can be found online. Currently, she is pursuing a PhD in Film Studies at the Gothic Centre in Manchester Metropolitan University.

The Elmer Buehler Award for Film Preservation will be presented to Heather Petrocelli on May 3 during the fifth annual Oregon Film History Conference. Sheldon Renan, the 2018 award winner, will make the presentation.