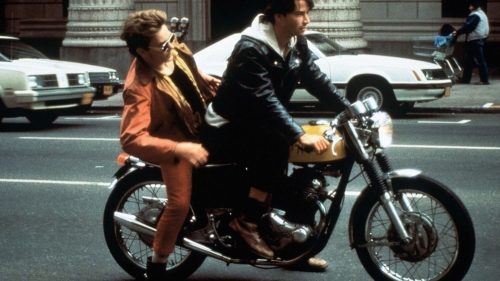 Downtown Portland is where young Mel Blanc sold newspapers. It’s where Clark Gable apprenticed as a stage actor, Gus Van Sant shot lots of MY OWN PRIVATE IDAHO (see above), Courtney Love performed at Mary’s Club, Bill Plympton animated his first film, and Matt Groening‘s mom used to drop him off at the Hilton to go swimming. Ernest Haycox, the Westerns writer (STAGECOACH), had an office in downtown Portland as did the dentist father of Gordon Scott, star of TARZAN’S GREATEST ADVENTURE.

During the 20th annual conference of the Association of Moving Image Archivists, three Oregon Cartoon Institute members will be right there, in the middle of the action.

Ben Truwe, OCI board member, will be there wearing his other hat, as member of the board of directors of Southern Oregon Historical Society. His panel will discuss specific issues unique to creating and sustaining regional and community archives.

Anne Richardson, OCI director and intrepid spelunker into regional caves of Oregon film history, will talk about the way films in private collections transformed her understanding of a regional strength.

Another presentation we’re excited about: a team from Paramount Pictures Library is coming to the conference to describe a project underway to preserve the interview footage from Warren Beatty’s REDS (1981).

Right up OCI’s alley, in terms of film history research.